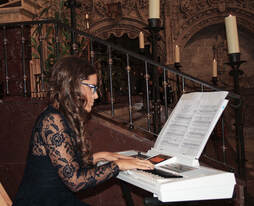 Nely Gutiérrez Pérez - MMUS, BMUS  (Piano, Music Theory)
Nely began her piano career at the age of eight at the Music Conservatory in Aviles, Spain. Nely graduated with a Higher Professional Training Diploma with a specialization in piano from the Superior Conservatory of Music Eduardo Martinez Torner and continued with a Master’s Degree in Teacher Training for High School Education and Teaching of Languages in the Speciality of Music, also she holds a Certificate of Montessori Pedagogy. As a music and piano educator, she has eleven years of experience in Public and Private Schools. In 2018 she moved to Vancouver where she started teaching piano with the RCM curriculum and European Method. Not only focusing on teaching piano the student grows as a pianist but also focusing on their needs, applauding their strengths and reinforcing their weaknesses. 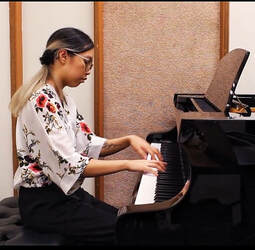 Leanna Rose - BMUS, B.EDU (Piano, Music Theory)
Leanna is a pianist with 16 years of piano performance as well as 5 years of teaching. She studied   the Bachelors of Music and Bachelors of Education program at the University of Calgary and is   transferring to UBC to complete her studies. Leanna has completed all the RCM theory curriculum   up to the ARCT level and is currently working to get her ARCT diploma in piano performance.   Additionally, Leanna also have experience as a music director, accompanist, and juror for private   piano music competitions. She was a senior alumni teacher who has mentored newer teachers in   teaching the RCM history and harmony curriculum. Her experience include teaching students of   all backgrounds, ages, and even students with disabilities. 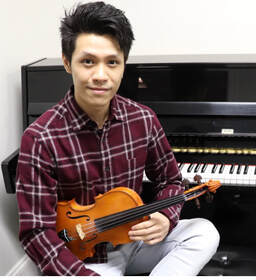 Carl Fung - MMUS, BMUS (Piano, Violin)
Carl received his Masters of Music at the University of Victoria and has performed with the Vancouver Symphony Orchestra. He has studied pedagogical courses of the education program at UBC which has qualified him to teach at Secondary Schools and aids in his approach to one-on-one private lessons. He has also received a Bachelor of Music from UBC. Carl understands the philosophy of academic learning in the classical field and that each student is unique and different in their approach of education and adapts accordingly to each student. As well, Carl has experience as a pianist and accompanist through-out his career. He is familiar with the RCM syllabus as well as piano adventure methods for new students. Carl has experience in aiding many students through successful youth orchestra auditions as well as RCM examinations. He also teaches using the Suzuki methods as well as the Royal Conservatory of Music Curriculum and guides students towards their musical achievements with studies and techniques including, Kreutzer, Mazas, Sevcik, Schradieck, Flesch, Fischer, and Galamian. 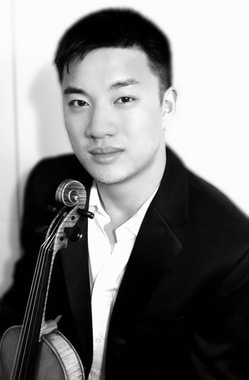 Jonathan Na - MMUS, BMUS (Piano, Violin, Music Theory)
Jonathan received his Masters of Music at the University of Ottawa where he studied under Yehonatan Berick and Yosuke Kawasaki as recipient of the Marusia Yaworska Graduate Scholarship. Jonathan has performed with the Ottawa Symphony Orchestra and served as concertmaster for the University of Ottawa Symphony Orchestra. Jonathan has also received an Artist’s Diploma from Vancouver Academy of Music under the guidance of Domagoj Ivanovic and Bachelor of Music from the University of British Columbia studying with David Gillham. Jonathan enjoys connecting with his students’ interests and finds ways to motivate, encourage, and inspire them. He is familiar with the Suzuki Method and RCM exams for violin, piano, and music theory. He also guides his students through various schools of violin technique, including Sevcik, Schradieck, Flesch, and Galamian. Jonathan understands that each student learns differently and consciously tries to adapt to each student’s interests and personality. 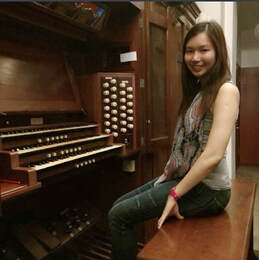 Cherry Chan - MA-Music, LTCL  (Piano, Violin)
Cherry studied music at the Royal College of Music in London and the Chinese University of Hong Kong. She has been serving as violinist, piano organist and choir conductor at her church. She has been teaching piano, violin and music theory for more than ten years and taught kids from age 4 to adults. She has worked at Yips children music learning centres, International Christian Quality Music Schools, Professional Strings Academy, ballet schools etc. She has her own set of methodology with a set of repertoires. She is currently studying violin pedagogy with Mr. Fatkulin (former violin teacher of Maxim Vengerov). Cherry encourages her student to be exposed to a wide variety of music such as going to concerts, masterclasses, exams, competitions and frequent performances. She can teach in English, Cantonese and French. 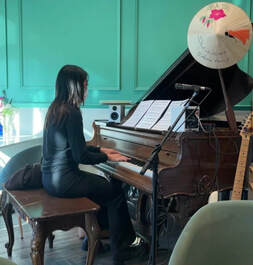 ​ Jennifer Chien - A.R.C.T  (Piano and Music theory)
Jennifer began her piano studies at the age of 9, and obtained her ARCT Piano Pedagogy   certificate at the young age of 15 under the studies of Prudence Leung. Since then, Jennifer has   worked hard to create a positive, encouraging and safe space for her students to learn the many   wonders of music. Jennifer believes in connecting with her students and building long lasting   relationships. She teaches in English and Mandarin. In her spare time, Jennifer performs piano at   a Viet-French restaurant, and enjoy composing and transcribing pieces as well. 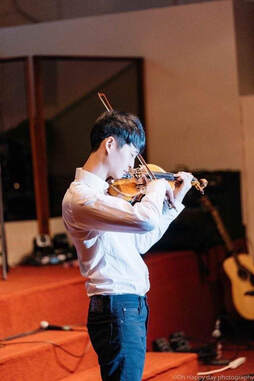 Chris Kim - MMUS, BMUS (Piano, Violin)                  Saturday
Graduate of Vancover Academy of Music, Chris Sho Mang Kim has started his music studies at the age of 9 in Korea. In Canada, he has received his bachelor’s of music degree studying under Robert Rozek on a full scholarship at Vancouver Academy of Music. He has been a concertmaster as well as principals in Stradivari ensemble and Vancouver academy symphony orchestra. Currently, he is an associate member of Ottawa Symphony Orchestra. Also as a soloist, he has played works by Mendelssohn, Vivaldi, Bach, etc, with orchestras. He has attended in music camps and festivals on full scholarships in Europe. There, he has studied with Rudolf Koelman, the last student of Jascha Heifetz. Sho Mang studied under Yehonatan Berick at University of Ottawa where he obtained his master’s degree. His goal is to help students to get familiar with music and he clearly gives students instructions what to prepare and practice that would improve students' skills and techniques. 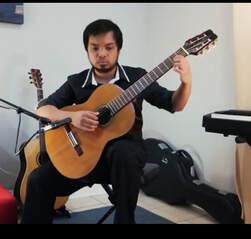 Francis Lumibao BMUS (Guitar, Ukulele, Electric Guitar, Beginner piano）
After his acceptance into the prestigious Berklee College of Music, Francis studied with world-class   musicians such as Bruce Bartlett, Amanda Monaco, Jane Miller, David Gilmore and David Newsam. Studying various styles, Francis focused on Classical and Jazz Guitar studies. In addition, he also studied music production, music business, music theory and some reharmonization techniques as well. After graduating with honors in 2019, Francis moved to Vancouver where he continues to perform and teach music, imparting the knowledge and skills he learned so far. In teaching the craft, Francis lives by the words of the late musician, Clark Terry, "Imitate, Assimilate, Innovate". Music can be learned first by IMITATING what is taught to us. Once we are able more comfortable in maneuvering our instrument, we can go deeper into the hows and whys of music and the theories behind each musical concept. 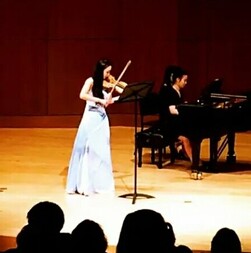 ​Lina Han MMUS, BMUS (Violin, Introductory Piano)
​Lina has been an orchestral violinist since a young age, regularly performing in BC orchestras such as the Vancouver Island Symphony, Prince George Symphony, Kamloops Symphony and the Fraser Valley Symphony. She has also performed in the Vancouver Roger's Arena. She holds a Bachelors and Masters degree in Violin Performance from the University of British Columbia and studied under Canadian soloist Jasper Wood, Juno award winner Andrew Dawes and Eugenia Choi (Julliard). She is a Certified Suzuki violin teacher from Hartford Connecticut, a registered RCM violin teacher and member of the Suzuki Association of the Americas. Most of her students receive first class honours in their RCM violin exams. She is fluent in both English and Mandarin Chinese and teach all levels of violin. 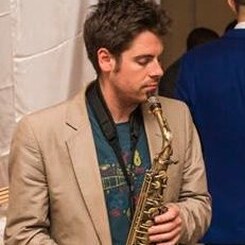 Joel Reid BMUS (Saxophone, Flute, Clarinet, Guitar)             Online lessons
Joel began his musical career by learning the saxophone at the age of 13. He studied Jazz Studies at Capilano University, majoring in saxophone from 2005 to 2009. Joel has been teaching music for 10 years and has worked in many different schools around the Vancouver area specializing in Saxophones and Clarinet. Currently Joel is the Band Director at Osler and Simon Fraser Elementary School.  5 of those teaching years were spent at Lions Gate Montessori as a Music Specialist. By having learnt how the Montessori Pedagogy works, Joel recognizes the importance of connecting with the children at their skill level. Joel understands everyone learns differently and is able to adapt his teaching style to match the student's own path of development.

Shilpa Sharma BMUS (Flute, Theory, beginner Piano)
Shilpa has been playing the flute for 14 years and is going into her final year at the University of
British Columbia doing a Bachelors Dual Degree in Music and Education. She has participated
in Kiwanis Music Festivals, the Richmond Music Festival, was a former member of the
Vancouver Academy Symphony Orchestra and the Vancouver Youth Symphony Orchestra. She
has done RCM Theory until ARCT and has history and piano background. At the UBC School of
Music, she has completed courses in ear training and musicianship, theory, history, conducting, participated in chamber and large ensembles such as the UBC Wind Ensemble and the UBC Symphony Orchestra. She is studying with Brenda Fedoruk who is principal flutist in the Vancouver Opera Orchestra. Shilpa is looking to pass on and inspire other musicians with the experiences that she has had and will have in the future. 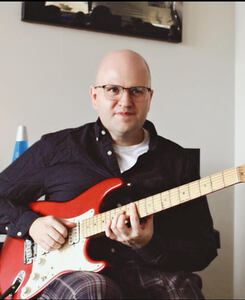 Christopher Giles BFA (Composition, Classical Guitar, Electric Guitar, Ukulele)
Originally from Ottawa, Ontario, Chris is a Canadian guitarist and composer. Chris has studied formal classical performance with Canada’s Royal Conservatory of Music. As a performer and composer, his study of the guitar also includes more than a decade of experience teaching students. In addition to performance, Chris’s passion for music inspired him to study Recording Arts and subsequently study composition at Simon Fraser University where, during his studies, He was awarded the “R. Murray Schafer Soundscape Award” and has had instrumental and electronic works performed as part of Ascension hosted by SFU’s School of Contemporary Arts as well as pieces for dance in Voirelia’s 2019 production, Dracula’s Garden. Now based in Vancouver, Chris is currently teaching both pop and classical music to a variety of aspiring musicians of all ages and backgrounds, helping them to unlock their musical potential and achieve their goals. 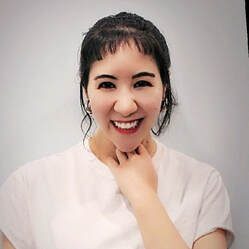 Arianne M - BA (IELTS/TOEFL/CELPIP)
Arianne is a passionate and avid english teacher with a love for teaching and spreading the joy of learning english. Arianne is a BC Board of Education registered english teacher. She has worked in a variety of fields including music through play, early childhood instruction, and the learning for the impaired (i.e. ADHD). She has also worked in recording and accompaniment efforts for orchestra and band ensembles in performance settings. Not only does Arianne believe that education enhances the mind, but she strives to encourage creativity and positivity in all her students so that they will be excited to take up their exams. She has 6+ years of teaching IELTS and TOEFL.